Both earthquakes and volcanos are related to Earth’s tectonic plates and their movement. Although earthquakes can occur anywhere on earth, the great majority of earthquakes worldwide occur at plate boundaries. Every month the Earth is shaken by approximately 80,000 earthquakes. In fact, at a rate of two earthquakes a minute, there is an earthquake taking place somewhere as you read this article [1].

An earthquake is the sudden, sometimes violent, ground shaking from the release of energy in the earth's crust. Earthquakes occur every day and typically with little or no warning. Tectonic forces in the Earth create an environment where parts of the surface grind past other parts. The boundaries between such moving parts are called faults. The catastrophic displacement of a fault generates an earthquake. Consider a piece of wood. You can bend the wood a little, until it snaps. The ability to bend is an elastic property of a material, and when it snaps you have exceeded its elastic limit. The same applies to geological faults. Rocks are only able to accumulate a certain amount of elastic energy, what we call elastic strain energy. When you exceed this energy, the rock breaks, much like a ceramic plate breaks when it hits the floor. In the case of preexisting faults, the strength of the rock is even less, and displacement will occur regularly. These displacements can occur gradually or intermittently. In the former case we speak of aseismic slip, while in the latter case the displacement is seismic. The moment when slip occurs along a fault, after the maximum strain energy is reached births an earthquake. The more energy released, the greater the earthquake magnitude [2].

Earthquakes occur along geologic faults. Geologists have categorized faults according to how the crust moves on either side of the fault. The main types of faults associated with most earthquakes are: normal fault, reverse fault, strike-slip fault, transform fault and oblique fault [3] 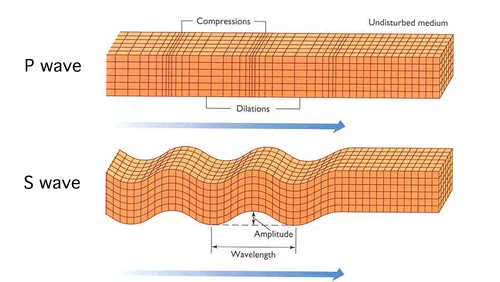 When a fault line ruptures, seismic waves race out from the earthquake epicenter. Compressional seismic waves, known as primary (P ) waves, travel fastest. Shear waves —secondary (S ) waves — travel more slowly but are the source of intense shaking and the bulk of earthquake-induced damage [4]. The effect of an earthquake on the Earth's surface is called the intensity. It is a measure of the strength of ground shaking at a particular place, and varies by location, proximity to the source of the earthquake, and type of material underlying the site. The intensity scale ranges from low (I) to high (XII) [2]

The magnitude of an earthquake is a measure of the energy released in an earthquake—a single value that depends on the area of fault rupture and amount of slip. The magnitude of most earthquakes is measured on the Richter scale, invented by Charles F. Richter in 1934. The Richter magnitude is calculated from the amplitude of the largest seismic wave recorded for the earthquake, no matter what type of wave was the strongest. The Richter magnitudes are based on a logarithmic scale. What this means is that for each whole number you go up on the Richter scale, the amplitude of the ground motion recorded by a seismograph goes up ten times. Using this scale,
a magnitude 5 earthquake would result in ten times the level of ground shaking as a magnitude 4 earthquake, and, 32 times as much energy would be released. To give you an idea how these numbers can add up, think of it in terms of the energy released by explosives: a magnitude 8 earthquake releases as much energy as detonating 6 million tons of TNT. Pretty impressive! Fortunately, most of the earthquakes that occur each year are magnitude 2.5 or less, too small to be felt by most of us [5].

In an average week Iceland's national seismic monitoring network detects around 500 earthquakes, thousands if there are seismic events in any of the active volcanoes. The reason is that Iceland is located on top of the Atlantic ridge: As the Eurasian and North American plates drift in opposite directions, Iceland is literally being torn apart, causing constant seismic activity. The volcanic zones are located along the boundary of the tectonic plates. They extend east from Reykjanes  peninsula in the southwest where the Reykjanes ridge section of the North Atlantic ridge rises above sea level, and  north-east from Mýrdalsjökull glacier in South Iceland, along the western part of Vatnajökull glacier in the Central  Highlands, and then extending north into the Arctic.

Comparing maps of the volcanic zones and the seismic activity in a typical week reveals an almost perfect match,  as most earthquakes take place in the active volcanic systems or in the South Iceland Seismic Zone, a transform  fault which connects the two zones.

What is the correct response to earthquakes? Click here to find out.

Most of the hundreds of earthquakes detected each week are very small, and pass without people noticing. Large quakes (3+ on the Richter scale) are most common in the active volcanic systems. While a magnitude 3 quake would not be considered a major seismic event if it took place on a continental fault line, they are considered very significant when they take place in volcanoes, where they are caused by the movement of magma.

Volcanic and seismic zones
The two monster volcanoes Katla, hidden under Mýrdalsjökull glacier and Bárðarbunga, beneath Vatnajökull glacier, have been particularly active in recent years. Geologists believe both are gearing up for eruptions. Katla, which erupts once every 40-60 years is long „overdue“ for a major eruption: Its last eruption was in 1918.

Other volcanoes have also trembled in recent years, including Öræfajökull, the Eldey system off the Reykjanes peninsula, mt. Hengill south of Þingvellir National Park and mt. Hekla in South Iceland. A second important type of earthquakes common in Iceland are fissure rifting events. Fissure swarms form at divergent plate boundaries, where the crust fractures by the pull of the tectonic plates. Fissure rifting takes place in intense rifting events which are accompanied by intrusion of magma into the crust. Such an event took place in the Tjörnes Fracture Zone off the north coast of Iceland earlier this year when thousands of quakes hit the remote Grímsey settlement.

Waiting for the big one
The other major fault zone is the South Iceland Seismic Zone (SISZ), a transform fault between offset sections of the Mid-Atlantic Ridge. It sits between the two volcanic zones, and is constantly being pulled in two different directions, causing tension to build up, which is then periodically released in earthquakes.

The zone has produced the most powerful earthquakes in Iceland, including what is believed to have been the most powerful quake to hit Iceland since its settlement. In 1784 a massive 7.1 magnitued earthquake caused widespread damage in South Iceland.

Quakes of this magnitude are believed to hit once every 100-150 years: The last major quake took place in 1912, which means we are currently awaiting for the "big one", or at least A big one, most likely in the easternmost part of the SISZ. [6]

[3] Incorporated Research Institutions for Seismology (IRIS). “What are the 4 basic classes of faults?”, 2015.http://www.iris.edu/hq/programs/education_and_outreach/animations/2

[4] Earthquakes and the Seismic Cycle.http://geoscience.wisc.edu/~chuck/Classes/Mtn_and_Plates/eq_cycle.html