Katla is one of the largest central volcanoes in Iceland, covered by the Mýrdalsjökull ice cap. The volcanic system, including Mýrdalsjökull area and the fissure swarm, Eldgjá, northeast of it, is about 30 km wide in its south-western part, narrowing gradually to the northeast and reaches a length of 78 km. The caldera, Katla, is located under the ice cap and is about 100 km2 and 700 m deep, filled with ice.

The Eyjafjöll volcanic system is a stratovolcano with well developed 2,5 km wide caldera at the top. The complex is covered by an ice cap above 1.000 m altitude and the highest point was at 1.666 m a.s.l. before the eruption 2010. Eruptions in Eyjafjallajökull are rare and relatively smaller than in Katla. Four eruptions in Eyjafjallajökull are known in historical times, in 920, 1612, 1821-23 and 2010. Before the eruption in 2010 there had been earthquake swarms there in 1994 and 1999 and the volcano was therefore under a close watch as an eruption under the ice cap would cause immediate danger to farms in close proximity to the mountain.

The first eruption, at Fimmvörðuháls an ice-free ridge between Eyjafjallajökull and Mýrdalsjökull, lasted from 20th March to 12th April 2010. This small eruption created the craters of Magni and Móði on the north side of Fimmvörðuháls, directly across the popular hiking trail between Skógar, south of the pass, and Þórsmörk, immediately to the north. The eruption produced limited amounts of basaltic lava and attracted a lot of attention from tourists that could get close to the spectacular lava fountains and lava streams.

The second eruption started on 14th of April 2010 within the ice-capped caldera, with an explosive summit eruption amplified by magma-ice interaction. Jökulhlaups (glacier outburst floods) are more common in Iceland than elsewhere in the world because of the interaction of volcanoes and glaciers. A warning system is operated by the Icelandic Meteorological Office that informs Civil Protection Authorities of impending floods or jökulhlaups. An important test was put to the system in the Eyjafjallajökull volcanic eruption on 14th April 2010 and the evacuation plans worked out well and no lives were lost due to the flooding. 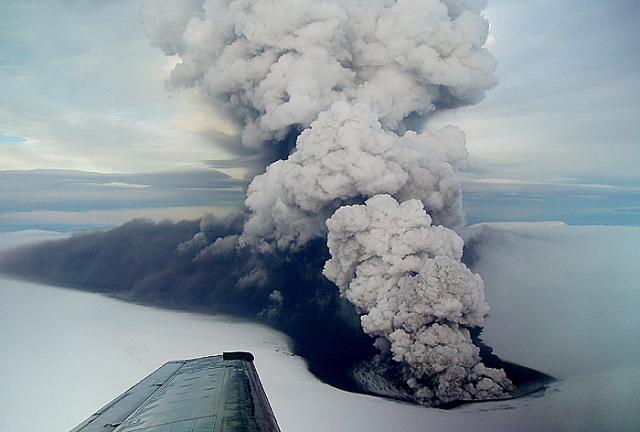 Grímsvötn is a central volcano below Vatnajökull ice cap. The volcanic system consists of the Grímsvötn central volcano, about 100 km long and 15 km wide volcanic fissure swarm including the Laki cone-row. The subglacier central volcano has developed a large composite caldera in the glacier Vatnajökull with a high temperature geothermal area. Grímsvötn is the most active volcano in Iceland. The number of eruptions since the time of settlement is uncertain but it is believed to be at least 60 (compared to about 20 in Katla). The most recent ones (at the time of writing) are those in 2011, 2004, 1998 and 1996.

Glacial bursts (jökulhlaup) originate in Grímsvötn and charge down the River Skeiðará. They were the main reason that the Ring Road around Iceland was not completed until 1974. The caldera contains a lake which is covered by a 200-300 meters thick ice slab. Creeping ice and continuous melting caused by geothermal heat cause water to accumulate and the water level of Grímsvötn Lake rises. The ice slab also rises. When the water reaches a critical level it seeks an outlet north-east of Grímsfjall. The water begins to gush from the foot of the glacier into the bed of the River Skeiðará. A glacial burst begins, slowly at first, increasing in volume until peak flow is reached. The flow then suddenly decreases and the exit channel closes.

The Laki eruption (Skaftáreldar) 1783-1784 and the resulting Haze Famine (Móðuharðindin) caused the worst environmental and socio- economic disaster in Iceland ́s history. The effects of the eruption reached far and the sulphuric aerosol cloud produced by Laki generated a persistent haze (dry fog) that hovered over large part of the northern hemisphere during the summer of 1783. On June 24th 1783, the haze was at its densest all over Europe. By the beginning of July it had spread to Russia, Siberia and China. At its peak, it covered about a quarter of the earth’s surface, or all land north of the 30° latitudinal line. It has been argued that the French revolution began with the eruption in Laki because of the enormous influence the mist had on the climate and farming in Europe.

Toxic ash ruined pastures so livestock got sick with a disease called gaddur (dental fluorosis), and starved. The weather cooled due to the mist, and sea ice reached the coast. When winter arrived in 1783–1784 livestock collapsed from starvation and disease due to the toxic volcanic material. People died of hunger. During the hardship one in five Icelanders (about ten thousand people) died, and around 75% of the farm animals were lost. In Fljótshverfi, Meðalland and Síða, about 40% of the population died, 20 farms were covered with lava and another 30 were badly damaged and had to be temporarily abandoned.

Katla Geopark is home to two of the largest basaltic flood lava eruptions in historical times in Iceland, Laki in 1783-1784 and Eldgjá around 938 AD. The Eldgjá fissure is at least 50 km long, extending from the Mýrdalsjökull ice cap in the southwest (Katla), into the Vatnajökull ice cap in the northeast. The most spectacular part of Eldgjá is a 8 km long part of it in the southwest where the fissure is about 400 m wide and 150 m deep. The fissure is a complex volcanic structure of a graben, an eruptive fissure and an explosive crater row. In the southernmost part the eruption was subglacial, and caused a large glacial outburst flood in association with the eruption, jökulhlaup.

The Eldgjá eruption was a catastrophic eruption that had worldwide impact. The Eldgjá tephra from the eruption is widespread in the northern hemisphere. Total magma volume produced in the Eldgjá eruption has been estimated to be around 19 km3. Lava flowed towards Álftaver on the Mýrdalssandur sand plain, along the Skaftá river course and down to Meðalland (the Landbrotshraun lava) and reached the Atlantic ocean in Alviðruhamrar in Álftaver.

The Eldgjá and Laki lavaflows are not only big on an Icelandic scale, they are also some of the largest lava flows on earth since the end of the ice age about 10.000

years ago. The two lava streams have very different appearance, the Laki lava is covered with thick moss while the Eldgjá lava is often covered with younger material but also characterized by countless number of pseudocraters or rootless vents (Landbrotshólar and Álftavershólar). These have been compared to similar features observed on the planet Mars.

Tindfjallajökull is one of the smaller icecaps in Iceland but the peaks of Ýmir and Ýma, that take their names from Norse mythology, provide for excellent all-around view, reaching a height of 1.462 m above sea level. The area is also a popular training ground for rescue teams.